Could Hyperbaric Oxygen Therapy help in children with autism?

In November 2007 a group of researchers set out to find out.

In a study published in BMC Pediatrics (1) they looked at the effects of hyperbaric oxygen therapy (HBOT) on oxidative stress, inflammation, and symptoms in children with autism.

They used mild hyperbaric treatments between 1.3- 1.5 atmospheres, which is considerably lower than most HBOT studies.

Health markers were assessed by fasting blood draws collected before and after the 40 treatments.

One of the important markers they check is called CRP, or C-reactive protein, a marker of inflammation.

At the end of 40 hyperbaric sessions, a trend towards improvement in mean CRP was present in both groups; the largest improvements were observed in children with initially higher elevations in CRP.

When all 18 children were pooled, a significant improvement in CRP was found.

“In this prospective pilot study of children with autism, HBOT at a maximum pressure of 1.5 atm with up to 100% oxygen was safe and well-tolerated. HBOT did not appreciably worsen oxidative stress and significantly decreased inflammation as measured by CRP levels. ”

The paper also notes that… 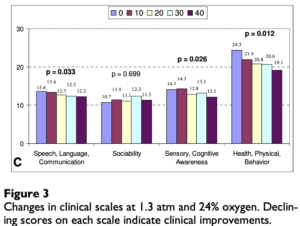 This graph taken from the study shows improvements in multiple areas, such as speech, language, and communication along with cognitive awareness and behavior.